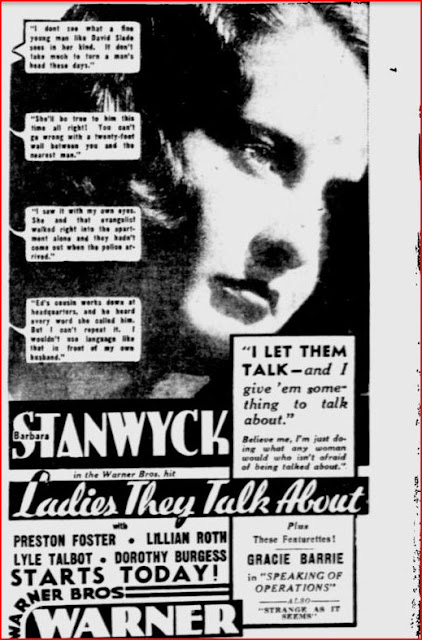 Ladies: proper prison etiquette dictates that you not slap Barbara Stanwyck in the course of your petty disputes, because she will punch you in the face. That's one of the lessons learned in this Warner Bros. collaboration between directors Herbert Bretherton and William Keighley. If Ever in My Heart offered the Pre-Code public a new, goody-good Stanwyck, Ladies They Talk About is the good old bad Stanwyck, the same one that made the now-legendary Baby Face later in 1933. Here she's Nan Taylor, an unrepentant gun moll who puts on an act to give her gang an in at a bank. The gang (led by Lyle Talbot) gets the loot and gets away, but Nan has to stay behind to finish her innocent act. Unfortunately, one of the investigating officers recognizes her as a hardened crook and takes her in. Her looks make her a newspaper cover girl and attract the attention of moral crusader David Slade (Preston S. Foster), who calls for a crackdown on crime from his revival pulpit and on the radio. Turns out he and she are old school chums, she a renegade parson's daughter. He thinks she can reform and appeals for her to be released into his custody, but she makes the mistake of admitting to him what she wouldn't admit to the cops. He promptly rats her out and dooms her to a term in prison.

Nan's place of confinement sometimes seems more like a girl's dormitory than a women's prison. The convicts are allowed to decorate their rooms as they please -- as long as they don't make an opening to the outside. Nan's fellow cons are an eclectic bunch, from a cigar-smoking butch lesbian who impresses her cellmate with her constant exercise to an aristocratic murderess who thinks of the others, especially a black prisoner named Mustard, as her servants. Playing Mustard, Madame Sul-Te-Wan has a great scene in which she chews out this biddy with a ferocity unusual for a black actress even in this period -- only for the effect to be ruined when a guard frightens Mustard with her pet cockatoo. Nan's main antagonist among the prisoners is Susie (Dorothy Burgess), who has an obsessive crush on David Slade and listens to him on the radio every night. Nan makes trouble for herself by shutting the radio off without permission, since she can't stand the sound of Slade's voice. It's Susie who learns the lesson cited above first hand; Nan floors her with one punch, and afterwards can intimidate her simply by making a fist. Stanwyck is never so close to being a female Cagney and the hard-boiled equal of Warners' gangster stars as she is here.

Slade still pines for Nan and writes her letters that she tears up contemptuously until she finds a way to use him. Learning that Talbot is in jail himself, she works up a plan for a joint breakout, part of which involves using Slade as an unwitting courier of a paper outline for an all-important prison key. Unwittingly enough, Slade mails the letter, but Nan doesn't know that her outside collaborator has himself been arrested. The letter is forwarded to prison and opened by the authorities, exposing the plot. Talbot and a partner are killed making a break, while Nan is doomed to finish her full sentence seething with fresh hatred for Slade, whom she assumes opened the letter and ratted her out himself. Finally free, she plans a mortal revenge, setting up a suspenseful climax that the directors botch. Nan goes to Slade's revival hall with a gun and heads to the anxious bench with the other penitents. It seems as if she intends to shoot him as he blesses her, and the film builds tension nicely as Slade works his way toward her while Susie, freed earlier and now working for Slade, watches with alarm and the chorus sings "Almost Persuaded." The climax should come here, one way or the other -- but the tension starts to dissipate as Slade recognizes Nan and invites her into a private room. It seems like this is what she wanted, because she has a more theatrical revenge in mind, though one not designed for play before a live audience. Her plan is more theatrical because it's more corny. She shows Slade a photograph of herself with Talbot and the other dead con, neither of whom the reformer knows. But she wants him to know that they're the reason why he's going to die. Suspicious Susie eavesdrops through a keyhole but does and says nothing until Nan has levelled her weapon and fired. Then she runs for help while Nan, her violent passion spent, immediately repents of wounding Slade in the arm. He immediately forgives her, and by the time Susie returns with some cops Slade is proposing to our antiheroine. Since bloodless wounds are the rule even in Pre-Code, no one notices that Slade has been shot, and Susie the eyewitness is disposed of with some trickery that convinces the cops that she couldn't have seen anything. The situation begs for a sequel in which psycho Susie seeks revenge on Nan, but Warners wasn't into sequels unless you count Gold Diggers of 1935, of 1937, etc. But even though Keighley and Bretherton waste opportunities on an anticlimax their closing stumble doesn't debase the entertainment value of their picture very much. If Baby Face is Stanwyck in apex-sexual-predator form, Ladies They Talk About is Barbara at her hard-boiled swaggering best. Don't expect much realism here; this picture is closer to classical, authentic pulp fiction come to cinematic life. If that idea appeals to you, so will the movie.

Warners knew that a brawling Stanwyck was a highlight, so they threw her punch into the trailer, provided as usual by TCM.com.