Answer: Because it's better known to most audiences, and is available from the Warner Archive today, as Convicts 4. Reprieve was the title of the autobiography of ex-con John Resko, upon which the film is based, and the picture previewed under that title when a Variety reviewer saw it in April of this year. Some markets obviously opted to go with the more familiar title. Can't find a trailer online but TCM has several clips and will be showing the picture on July 19. Here's Rod Steiger introducing himself to the new fish.

In Daytona Beach,there's less ambiguity about the title of the new attraction.

Actually, IMDB says the title is A Lust to Kill, and the attraction isn't so new. It came out in 1958.Attack of the Jungle Women first appeared a year later. It seems to have been a semi-documentary picture, to put it generously. SomethingWeird throws some light on the story on their YouTube channel. 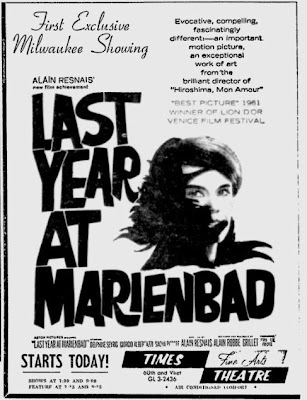 That girl's face is surely meant to be spooky, but it looks like someone threw ink in her face, alas.The film itself is great stuff if you don't mind perplexity. I don't when it looks good.

And speaking of Art, here's what you'd see at a Pittsburgh art house. 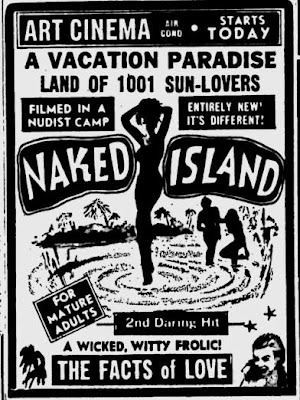 The only Naked Island listed at IMDB is a 1960 film by the late Japanese director Kaneto Shindo of Onibaba and Kuroneko fame. No synopsis of that picture mentions a nudist colony, and Shindo's movie isn't supposed to have opened in the U.S. until September, so the film advertised probably isn't that much of an art picture. What it is exactly, I can't say. The only Facts of Love listed at IMDB is a British originally called 29 Acacia Avenue, from the racy days of 1945. It's probably a "daring" choice for this theater because patrons probably left wondering, "How dare they show us this?"

Posted by Samuel Wilson at 7:11 PM