Someone in Florence AL didn't get the memo from the studio. 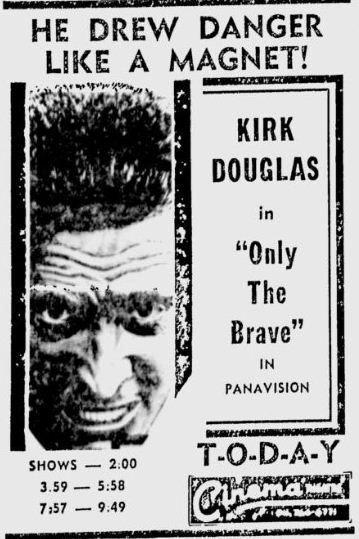 The picture being advertised, as you may have guessed, is Lonely Are the Brave, but "Only the Brave" was the picture's working title. It was being promoted under that name as late as March 1962, as evidenced by a Leonard Lyons gossip column which includes an unlikely story about Tony Curtis pretending to be a cab driver to play a practical joke on Kirk. Depending on how close to release the title changed, some markets may have received press materials with the old title -- though this exhibitor isn't using the official movie logo. There may have been an executive decision that "Only the Brave" would make a stronger impression than the actual title. We'll never know if the exhibitor was right.
Posted by Samuel Wilson at 6:45 PM