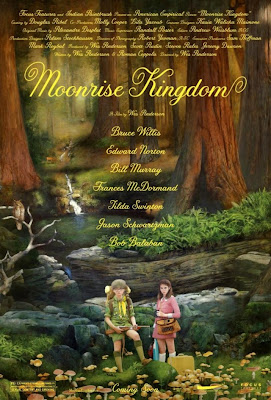 Cross Stanley Kubrick and Harvey Kurtzman, or maybe Charles Schulz and Sergio Leone, and you have Wes Anderson, one of today's most distinctive and divisive directors. Anderson combines an absurdist sensibility bordering on the parodic with a rigorous widescreen aesthetic that saps the life from his stories for some viewers. He often seems like a man out of his time, perhaps never more so than in his new film, a period piece set in 1965. Anderson wasn't even born yet, but he has clearly been shaped by the period. I can empathize; slightly older than the director, I grew up fascinated by the pop culture of the years just before my birth, collecting magazines like Life and watching reruns of old shows on TV. It really was a world where Hank Williams and Benjamin Britten could share space on a soundtrack, a country with a genuine common (albeit still exclusionary) popular culture. Anderson gets the humor of the period, the paradoxical naive sophistication exemplified by Schulz's Peanuts, which Anderson has referenced before ("Christmastime is Here" plays on the Royal Tenenbaums soundtrack) and references in his new film more than ever. The dog of the picture is Snoopy; the protagonist says "Rats!" in a frustrated moment; a minor character called "Lazy-Eye" reminded me, at least, of a sequence when Linus had to wear an eyepatch to correct that once-notorious condition. Moonrise Kingdom is Peanuts for adolescents, incorporating puberty and rebellion against parents in Anderson's mock-epic mode. It's a story of two troubled early-teens who run away from their respective homes and occasionally lash out at their pursuers, narrated and tangentially participated in by Bob Balaban in a manner that suggests another mash-up: Badlands adapted for television by Rankin and Bass.

The boy is an orphan, an emotional misfit, a scout who doesn't fit in. The girl is iconically dressed like an embodiment of the moment, hates her parents, and steals fantasy novels from the library. It feels like a story that could have been filmed in 1965, though it would have been somewhat less violent, or at least less bloody, than the 2012 film. It's not about 1965 in any critical or nostalgic way; Mad Men this isn't. The dating is more a matter of art direction than anything else. The adults are the sort of eccentric fuddy-duddies you might find in an AIP beach picture of the period, though the eccentricity of Anderson's adults is strangely buttoned-down and underdeveloped. The director who restored Bill Murray to credibility as a comic actor practically wastes Murray this time by casting him as a generically crabby protective parent. There's nothing tailored to the star in the role, but Murray's here because that's what's expected. Bruce Willis is here as a schlub of a policeman because he needs to remind us every few years that he can act. Harvey Keitel has a small role because maybe Anderson expects people to cheer his mere presence the way they did on the opening weekend of Pulp Fiction. Throw in Frances McDormand, Edward Norton and Tilda Swinton and you have an adult cast overwhelmingly overqualified for the material, with only Norton getting a really comedic role to play with as an overzealous, insecure scoutmaster. Yet for all that the talent seems wasted, the film itself isn't a waste. It's not as rich an experience as it could be, mainly because Anderson can't take seriously the peril he puts his protagonists in, but it's also not as superficial as his detractors might assume. The picture is superficial, but Anderson's commitment to period appearances allows him to work on an evocative, archetypal level, while the two young protagonists, played by Jared Gilman and Kara Hayward, are appealing in their alienation and their urge for adventure. Anderson works on a take-it-or-leave-it level. Many people may be left cold by his style without it reflecting on their taste, while I like a director who can work the wide screen and for whom style is substance. Moonrise Kingdom is a comic book of a movie, as opposed to a comic-book movie. It can get by on looks because the mock-epic framing is essential to Anderson's comedic intentions. It may not satisfy people looking for more profound pathos or more powerful gags, but it works as what it is, and that works for me.
Posted by Samuel Wilson at 8:32 PM

Yeah I will admit you could see the film as superficial, but as you note the stylistics and singular filmmaking do work by and large. It's actually my favorite Anderson of them all. I lament that the found the kids so soon though.

Sam, when I call the film superficial I'm trying to get to the essence of Anderson's comedy, which is very much a matter of pictorial style and staging and something I like to watch. I agree that they find the kids too soon, but the kids do get away again for more adventures. If those strike you as anticlimactic that may be a point against the film.