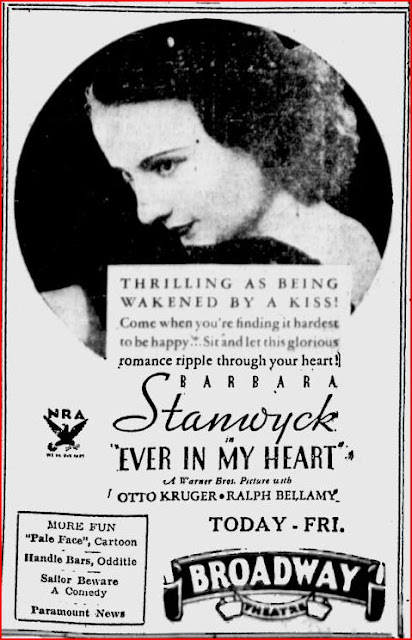 In 1933 Barbara Stanwyck made two movies featuring tragic romances with foreigners. The better known of the two, and the more transgressive, is Frank Capra's Bitter Tea of General Yen, which links her with a Chinese warlord, albeit one played by a Swedish actor. The other film, directed by Archie Mayo for Warner Bros., is more explicitly opposed to prejudice than General Yen and more totally tragic than the Capra film. Ever in My Heart is a product of a peak-period of anti-war sentiment in the United States. Many people had come to question the benefit or the point of American involvement in the Great War, as well as the role of "black propaganda" in driving the country toward war with Germany. Mayo's film also reflects a Roaring Twenties backlash against superpatriotic and bigoted "100% Americanism" and a related prejudice against so-called "hyphenated Americans." Yet the same film is also a patriotic melodrama that ends with Stanwyck playing a tragic American heroine. To explain, she plays Mary Archer, daughter of a New England family with generations of war heroes; their names predominate the local war memorials. Mary's waiting for her childhood friend Jeff (Ralph Bellamy) to come home from his studies in Germany, fully expecting to love and marry him. But by 1933 Ralph Bellamy is already "Ralph Bellamy," the archetype of the dull male passed over in favor of someone more clever, more exotic, more something. So Mary passes Jeff over in favor of his German school chum Hugo Wilbrandt (Otto Kruger), who serenades her with language lessons in the form of romantic lieder. Mary falls hard and fast, and while Jeff's a good sport about it, her own brother Sam (Frank Albertson) doesn't like foreigners and resents the way Hugo has replaced Jeff in her heart. So why doesn't he marry Jeff, then? Anyway, Hugo lands a teaching post at a local school and earns the admiration of Mary's social circle. His acceptance is capped by a party celebrating his oath of citizenship on the same day that the newspapers report Germany's invasion of Belgium.

America's entry into the war is still years away, but constant press reports of German atrocities in Europe stir up hostility toward Germans in the U.S. Things get worse when the Lusitania is sunk. Mary's friends disinvite themselves from a tea she's holding in order to ostracize Hugo, who soon loses his teaching post. As the Wilbrandts slip into poverty their child sickens and dies and Mary herself grows ill from malnutrition. It gets so bad that local punks stone Hugo's dachshund; the poor man has to put the animal out of its misery with a bullet. Finally, when Mary's family takes her home to recuperate, Hugo promises to follow, but instead leaves for Europe, writing Mary that American prejudice has driven him to go home and fight for his country. When the U.S. finally declares war on Germany, Mary honors family tradition and joins the military as a canteen worker. Isn't she surprised to stumble upon Hugo in an American uniform near the front lines? For a moment I thought the picture was going to throw an O. Henry at us and reveal that Hugo had meant the U.S. as his country. But no: we are to understand, as Mary understands it, that Hugo is a spy for the Germans. Jeff, who's also at war, offers Mary his suspicion that a spy's at work, but Mary doesn't yet reveal Hugo. But Hugo has snuck into her quarters to beg her to spare him. The fact that they still love each other earns him a night's reprieve, if you know what I mean, but he insists on leaving in the morning with his info on U.S. troop movements. That's not going to happen, but how could Mary live with herself after sending Hugo to his death, or killing him herself? Since this is a tragic love story, the answer is that she can't and she won't. Instead, the picture ends on a strange note of patriotic liebestod.

In more expressionistic directorial hands -- and it's not as if the director of Svengali is helpless in this regard -- Ever in My Heart could have been a work of delirious camp, but however appalling the tale gets, it's told in a plodding manner, handicapped by Otto Kruger's questionable credibility as a leading man who could steal a girl even from the hapless Bellamy. The story's also compromised somewhat by its mixed message. Everything leading up to the war tells us that the forces driving Mary and Hugo apart are wrong, yet once the war came they play their wartime roles to the hilt instead of rebelling, deserting or otherwise following the example of the lovers in the contemporary hit A Farewell to Arms. I suppose you could count Mary's final solution as a kind of act of rebellion, but it's also a self-conscious act of patriotic heroism that could have left audiences convinced that it was the right thing to do. It also leaves the film feeling old-fashioned for its own time, too indulgent of the pathos of renunciation typical of silent cinema instead of applying the hard-boiled survival ethics of Pre-Code cinema. Warner Bros. tried to sell the film by avoiding the subject matter, as the newspaper ad above shows, while emphasizing the emergence of a "new" Barbara Stanwyck. By this the studio meant that she would play a "good girl" immediately after two definitive "bad girl" turns in Ladies They Talk About (coming soon to DVR Diary) and Baby Face. It doesn't quite come off, Stanwyck coming closest to full life only in the war scenes. Ever in My Heart is another film that ends up more interesting than fully entertaining for what it tells us about Hollywood's conflicted attitude toward war in the year when Hitler took power in Germany and the long march to the next European war began.

To be fair, let's let George Brent make the case for the picture in the original trailer from TCM.com

Of course I am a fan of BITTER TEA, but have not actually seen EVER IN MY HEART, and lament it's failure to attain the level of delirious camp. You incorporate the war underpinning quite effectively here. I did see LADIES THEY TALK ABOUT and look forward to the review, Samuel.