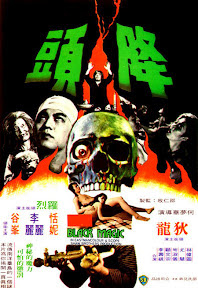 Ho Meng-hua's landmark horror film for the Shaw Bros. studio is like Hong Kong's answer to White Zombie, a tangle of sex, greed and, yes, black magic. It opens with a prologue establishing its venal villain, Sha Jianmi (Ku Feng) plying his trade by using voodoo-like dolls to kill a cheating husband and his mistress for an aggrieved wife. The mystical murder comes to the attention of the film's Van Helsing figure, Master Furong (Ku Wengchun, an avuncular looking Wifred Brimley type), who immediately guesses that Sha is behind it and sets about taking him down from afar. Sha senses that a storm's coming and plasters his walls with warding posters streaked with blood from his own tongue. His efforts are to no avail, but he manages to escape with facial burns while leaving his client to die as his shack collapses on her head.

Two naked people are dead, and for Master Furong one thing is certain: Sha Jianmi is responsible

Sporting grey hair after his ordeal, Sha sets up shop near a construction site in Kuala Lumpur and somehow acquires a reputation that recommends him to Lang Jiajie (Lo Lieh), who's trying to seduce his way to Luo Yin's ("Tanny" aka Tien Ni) money and wants a love potion to lubricate his way. Sha demands payment in gold the size of his pet skull, though not in advance. Doing business with him is like dealing with the devil; you have to be careful what you ask for. His potion is good for a one-night stand, but in the morning an enraged Luo throws LJ out. Loverboy feels he didn't quite get what he wanted, but Sha doesn't care: pay or die. LJ doesn't pay, and he dies. But he's planted a thought in Luo Yin's head, since he stupidly admitted using a love potion, so the wealthy woman summons Sha to her home. She has the hots for architect Xu Nuo (Ti Lung) and, as LJ already noted, plenty of money to pay for a proper spell to lure him away from his betrothed (Lily Li). She's brazen enough to use Sha's potion on Xu's wedding day -- the briefly happy couple has Christian nuptials -- walking out with the groom in the middle of his reception as the bride looks on in horror.

Luo Yin has regrets the morning after, but she learns from her mistakes.

Luo has plenty of money to keep Sha keeping Xu in line, but Sha wants more than money. He covets Luo's body as well as her coins and gets both -- duding himself up for a while in the process in a naively charming way -- even as Luo keeps Xu as her plaything. To make things more certain she has the sorcerer put a death curse on Xu's betrothed, but her friends, figuring out that magic is involved -- the fact that they can see worms crawling beneath her skin is just a bit of a giveaway -- find that there's an expert in such things close at hand. It's none other than Master Furong, who after draining the evil worms from the intended victim heads to Luo's lair to place the place under a musical siege. The music loosens the villains' grip on Xu, who manages to escape (Ti Lung's only real fight scene in the picture is with a dog) as Furong holds Sha and his skull at bay.

Xu Nuo won't really be free again until Sha is dead, however, though temporary remedies like centipede soup are available. While Sha lives, Xu's the object of a spiritual tug of war as the bad guys reassert their influence. The film closes with a camp-cosmic showdown at the construction site as Shan and Furong vie for dominance with all the mystic powers in their arsenals, clouds gather as if the Red Sea's going to part, and poor Xu wanders among the girders. It's sort of like the climax of The Manitou staged by Harold Lloyd. I'm not sure if that'll mean anything to every reader, but to me that's a good thing: not quite intentionally funny, but it'll do.

Black Magic has a reputation for outrageous sleaze and gruesomeness, -- I haven't described the makings of some of Sha's potions, but one involves a woman stuffing rice in an intimate place --but I found it great fun. It's solid, sincere entertainment whether you find it amusing or revolting. For me, part of the fun was seeing martial-arts stalwarts like Ti Lung and Lo Lieh in situations they couldn't fight their way out of. It reinforces my feeling that they were decent actors as well as strong genre performers. Above all, however, Ku Feng carries the picture. Sha Jianmi is a great movie villain: powerful enough to be an indisputable menace, but not so powerful that he can't play the coward, too. Most importantly, Sha is no acolyte of abstract evil like a contemporary American devil worshipper, but a self-interested sociopath of limitless greed. He's perfectly hissable with just enough charisma to be compelling and just enough scuzzy venality that you're not going to root for him at the end. For moralists in the audience, he can be taken as an embodiment of the evils that can arise from loosened sexual mores, but apart from his dalliance with Luo he's more interested in money than anything else. After seeing too many villains in movies with vaguely apocalyptic motives, or who do evil to prove some kind of philosophical point, Sha is a breath of fresh air, though his breath probably doesn't smell that great.

Ho outreaches himself at the climax, as his effects can't live up to his vision, but he should have you committed enough to the story by then that you can forgive some of the cheapness and appreciate more of the craziness. As long as you're not squeamish, Black Magic is a grand piece of exotic entertainment and a landmark of global genre cinema from the Sleazy Seventies.
Posted by Samuel Wilson at 9:40 PM

Wonderful review, Sam. I actually prefer this one to the sequel, which is a film most everybody else tends to prefer, lol. BLACK MAGIC 2 is essentially a remake of the first, but has Lo Lieh playing the black arts magician and adds even more sleaze to the mix including an army of zombies. The sequel has a rushed feel to it.

As you stated, BLACK MAGIC was quite a trendsetting movie. Kuei Chi Hung took this template and made it much darker and even more nasty with his BEWITCHED and its sequel THE BOXER'S OMEN.

They really don't make'em like this anymore. I dig the second one more specifically because of Lo Lieh... a favorite of mine.

Well guys, I guess I should watch the sequel for comparison's sake, and I certainly can't complain about more Lo Lieh in a picture. But the original looks like a tough act to follow.

venom, I've seen Boxer's Omen and that's practically in another category of strange. It's more impressive in terms of effects and overall insanity but Black Magic has a stronger story and villain. But I ought to take a fresh look at the later film to make the comparison more fair.