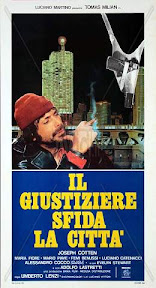 The way Umberto Lenzi tells it, Tomas Milian came back from a trip to the U.S. raving about a book he'd bought at an airport to read on the flight back to Italy. The book was David Morrell's First Blood, and Milian thought that the novel's antihero, the alienated Vietnam veteran John Rambo, would be a great part for him. Fat chance of Lenzi getting the rights, of course, but couldn't Milian play a character like Rambo in his next film for the director? Couldn't he even call the man Rambo? That he could do, and so Milian is just plain Rambo, with no first name that I can recall hearing, in Lenzi's Giustiziere sfida la citta' -- "The Executioner vs. the City" according to Bing Translation. Lenzi says that he wanted to call it Rambo vs. the City but got rebuffed by the distributor because "rambo" was a nonsense word in Italy and could never sell a movie. Lenzi tells the story with some hindsight, of course, but he also relates that Milian wanted to do the film to improve his image after having played his ultimate criminal grotesque in the director's Almost Human earlier in 1975. The star's desire to play a good guy doesn't sit well with his desire to evoke the irreconcilable Rambo of Morrell's novel, as opposed to the redeemable Rambo of subsequent Sylvester Stallone movies.

Who is that masked man?

How much of the "real" Rambo is in Milian's Rambo? Lenzi's protagonist is a loner and a drifter who apparently has been carrying on a personal war on crime that had taken him to Marseilles before he arrives in Milan in the movie. The look seems right, though Milian's overall scruffiness seems more to anticipate feral cops like Mick Belker on the Hill Street Blues TV show. He doesn't care to work with others, rebuffing his buddy's invitation to join him in a new private police force (a sign identifies it as "Mondiapol"), but will lend a hand when the chips are down. This Rambo doesn't like to "grow moss" in one place, but that makes him as much like the wandering heroes of Westerns (or peplums) as it makes him a Rambo redux. In Milan's career, his Rambo looks most like a dry run for his more lighthearted Nico Giraldi character in Cop in Blue Jeans and its sequels.

If Giustiziere is a lesser Lenzi cop movie compared to such genre highpoints as Almost Human and Violent Naples (the latter featuring another prime Milian grotesque) it may be because director and star were trying to do too much at once. On top of polishing Milian's image and allowing him to riff on Rambo, Lenzi and writer Vincenzo Mannino are playing the old Red Harvest game, following in the foosteps of Hammett, Kurosawa and Leone by having their protagonist play two crime families against each other. Rambo's pal in the private police force is trying to solve the kidnapping of a rich man's son, for whom the perps want 2,000,000,000 lira ransom. After his buddy gets killed -- a failed pursuit ends with his skull getting smashed on a rock -- Rambo's revenge (as the film would get retitled in some places) consists of goading a rival crime clan to muscle in on the kidnappers. This brings him into contact with Paterno, an aging boss whose path last crossed with Rambo's in Marseille. He'd love to destroy Rambo, but feels incapable himself -- it's a secret that he's going blind -- and fears that his impetuous son will only get killed trying. We should see an old lion making a last stand, but what we get is an alarmingly decrepit Joseph Cotten, far from the days of his Forties stardom in Hollywood. He wears a huge pair of glasses most of the time -- there's a plot reason but you can't help thinking it's all the better to read cue cards with -- and his voice is slow and tremulous as he speaks his lines. Some of his line readings are robotic, as if he doesn't understand what he's saying or what's going on in the picture. He may have been sick, or drunk, or both, but it's a demoralizing sight that makes it hard to enjoy the picture.

Cotten aside, Giustiziere lacks the force and flash of Lenzi's best work in the genre. While we might expect a Rambo type to become a furious avenger, especially after his girlfriend is beaten to death, Milian seems too committed to being a good guy to give his part the power it needs. Nor is Lenzi in top form; most of what's good here he's done better elsewhere. For what it's worth, the film doesn't come close to living up to its American title. The U.S. poster and DVD box art show a bald fellow applying a blowtorch to a chained couple. The film itself has the chained couple but no baldy with a blowtorch. In the actual scene, Rambo's idea of torture, after having cuffed them together across a bathroom pipe, is to take a leak in front of them and throw the cuff key in the unflushed toilet.

The shot above is more suggestive than the scene itself;
the scene below is more violent.

It may be bad form to express disappointment over this, but violence and cruelty are part of the genre and any given film looks tepid without it. Worse still, keeping track of the kidnapped kid grows tiresome quickly -- as Lenzi and Mannino must have realized themselves in giving Rambo an extra revenge incentive. The American edition is apparently an incomplete translation of the Italian original, but I suspect that the full film won't make a much better impression. You might want to try Syndicate Sadists as your first Lenzi cop picture before watching the stronger stuff, but if you want to watch just one to see what the genre's about, it should be something else.