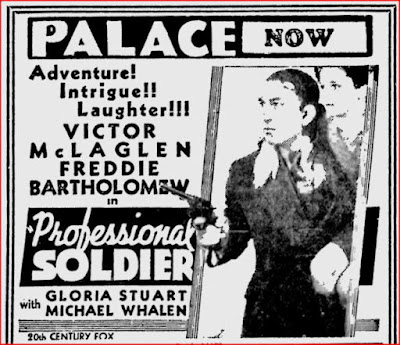 If there had been an Expendables in the 1930s, Victor McLaglen would have been part of it. More to the point, had there been one in the 1950s McLaglen would have been there. For a generation after the coming of sound, he was Hollywood's idea of a tough man, so that no one seemed to consider it implausible that his character could brawl with John Wayne when McLaglen was in his mid-sixties. He had a record to back up his reputation, having been a heavyweight boxing champion of the British Army during World War I. But he represented a different idea of physical power than we envision today. For men like McLaglen or Wallace Beery, it was all about bulk, with a little bit of attitude thrown in. They would have found it ludicrous to need to get the kind of definition Sylvester Stallone aspires to, or Arnold Schwarzenegger achieved, in order to be taken seriously as action heroes. In a way, Liam Neeson during his midlife renaissance as an action hero comes closer to the McLaglen model. We don't assume that Neeson is ripped, but we know that he's a big old man with cunning and a mean streak. So with McLaglen. If you asked audiences of the 1930s who'd win between McLaglen and, say, Johnny Weissmuller, a body beautiful type, and my hunch is that people'd pick Vic. Hollywood envisioned McLaglen as a one-man army half a century before that became a common movie concept -- and they assumed he could act, too. He closed out the year in which he earned an Oscar for John Ford's The Informer with Tay Garnett's Professional Soldier -- so called, I presume, because the word "mercenary" wasn't yet part of the pop-culture lexicon -- for Twentieth Century-Fox, where he was paired with fast-rising child star Freddy Bartholomew in what the studio apparently imagined as a more male-oriented and violent version of Little Miss Marker.
Like that Shirley Temple hit, Garnett's film is based on a Damon Runyon story, and Runyon's story has a similar "tough guy bonds with cute kid" focus, following the well-established Wallace Beery-Jackie Cooper model. McLaglen plays Michael Donovan, an ex-Marine whose past exploits seem partially based on the career of Smedley Butler. His known involvement in the toppling of governments makes him a person of interest to would-be revolutionaries in a Balkan kingdom. They want him to kidnap, but not kill, the country's monarch, assisted only by his protege, George Foster (Michael Whalen). Together, Donovan and the revolutionists -- who assure our hero that they're neither Bolsheviks nor Nazis -- make up history's most incompetent conspirators. They do not provide, and Donovan never asks for a description of the monarch to be snatched. So when Donovan and Foster sneak into the palace during a costume party, they immediate pounce on the first old guy the find sleeping in a big bed. They are interrupted in their assault by a boy who seems more intrigued than alarmed by the mayhem. Fortunately, the lad quickly corrects their mistake. The old fellow isn't the king -- he is. And having convinced himself that the intruders are American gangsters ("Are you Dillinger?" he asks Donovan) he eagerly wants to follow wherever they're going -- though his nanny Countess Sonia (Gloria Stuart), whom Foster had met cute with earlier, is less eager when she stumbles onto the scene.

The revolutionists don't expect to take over as soon as the little king is gone. They know that Peter II is but a figurehead for a clique of corrupt nobles led by Gino (the always-repulsive C. Henry Gordon), and that the boy's popularity has shielded Gino's clique from proper scrutiny. Donovan's employers mean to restore the king as soon as Gino's government collapses, as they expect it to once it shows its true face. In the meantime, Peter enjoys the adventure of his life with adult playmates who can show him how American sports are actually played -- his own notion is a bizarre jumble of uniforms and equipment. Countess Sonia doesn't trust the revolutionists, however, and manages to get the location of the safe house to the authorities. But when the troops sweep in Donovan escapes with the king. While they remain on the run Gino's government falls and the revolutionists take over with promises of reform. Running out of money and food, Donovan figures he can now deliver Peter to the palace, but Gino's men intercept them and imprisons them in the villain's private fortress. Now the shoe is on the other foot, with the revolutionists' credibility in question during the king's continued absence, while Gino schemes to make that absence permanent.

McLaglen's physical power has been emphasized throughout the picture. During an early brawl in a Paris cabaret, he wields what may be history's flimsiest balsa-wood chair; flung across the room, it explodes into splinters upon hitting a victim's head. At the climax, he becomes not just a one-man army but nearly a one-man Wild Bunch. In one of the most violent sequences of the first years of Code Enforcement, Donovan gets control of a machine-gun nest after breaking out of jail and rescuing Peter from a firing squad. He gleefully mows down at least a dozen of Gino's soldiers, but he's just getting started. Growing impatient from waiting for more men to charge into firing range, he uproots the 88-lb. weapon and goes on an amoklauf through Gino's compound, mowing men down left and right. Soon the mere sight of him wielding the weapon suffices to make hundreds more soldiers surrender, and the day is saved. Solo heroism on that scale is uncommon in the Classic-Hollywood era apart from war-hero biopics. It's a moment of exuberant fury that just about makes the ever-predictable and often idiotic story worth sitting through. McLaglen doesn't exactly vindicate the Academy, playing a type rather than a character in a role Beery might have done just as plausibly. He doesn't have the strong personalities to play against that produced what I consider McLaglen's best work in Gunga Din, while Bartholomew gives a one-note performance, which is all his role really requires. He'd accomplish more with the clash of childish privilege and working-class savvy in Captains Courageous soon enough. Professional Soldier is no one's finest hour, but it's interesting from a genre-history standpoint as a virtual "action movie" long before that was a meaningful category in Hollywood. Its downfall may have been that it had to be something else instead.
Posted by Samuel Wilson at 8:33 PM