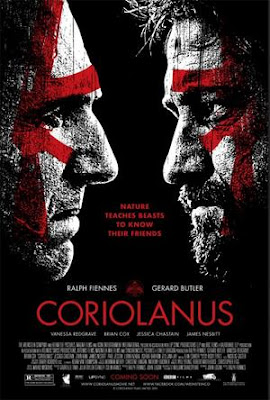 Here's a Shakespeare play not often filmed, perhaps because it's hard to make its hero likable. Caius Marcius was a Roman soldier from the early days of the Republic who earned the name Coriolanus after taking the Volscian town of Corioli nearly single-handed. A patrician, he ran for consul but ended up banished from Rome after he was accused of conspiring against the constitution, more or less. He joined forces with the Volscians and led them to victories but stopped short of taking Rome after appeals for mercy from his wife and mother. According to the legend, the Volscians then killed him. Shakespeare portrays him as a man perhaps fit for leadership, but not for politics. A reluctant campaigner, he abhors actually having to "beg" for votes from the common people and is embarrassed by the idea of boasting of his war heroics or the wounds he suffered in combat. While the political context makes him look particularly contemptuous toward commoners and the poor, at his core Coriolanus seems the type who doesn't really see himself accountable to anyone. I don't mean that he's a sociopath, but that he doesn't feel that he should have to give an account of himself, or explain himself to anyone. He does his duty and should be accepted as he is, but if anyone gets in the way of his duty, all bets are off.

Ralph Fiennes directed and starred in this picture, which boasts a screenplay by John Logan, in case anyone wondered why this isn't called William Shakespeare's Coriolanus. While some may be reminded of the infamous "Additional dialogue by Sam Taylor" credit on the Douglas Fairbanks-Mary Pickford version of The Taming of the Shrew, Logan and Fiennes have added context, not text, to the play. Like many moderns, they've done up the Roman tragedy in modern dress, setting it in "A place that calls itself Rome" but looks like somewhere between the Serbia where it was shot and the class-conflicted Britain where it opened. Caius Marcius fights with modern weapons, though his is the kind of war that pauses while he and the Volscian chieftain (Gerard Butler) duel with knives. His political travails are televised and from Rome he can Skype with soldiers on the front lines. It's a familiar gimmick but Fiennes goes about it as if no one had ever thought of it before. Yet it's unclear whether the modernization really clarifies the essence of the play, especially when you're unfamiliar with the original and don't know how much may have been cut out of the movie. There's nothing wrong with cutting Shakespeare, as Kenneth Branagh's Hamlet proved by cutting nothing, but you are entitled to wonder whether an edited text still delivers Shakespeare's message or if it's been reshaped to another purpose. That suspicion wouldn't bug me so much if Fiennes's purpose were more clear. He films the play with the trapping of modern political media, but despite his character's railing against the rabble it's hard to tell whether we should sympathize with or condemn Coriolanus's opinions. His political rivals are a couple of cynical hacks but that doesn't make Caius Marcius right. The film's political ambiguity may reflect that of the play, which I haven't read in full, but after all Fiennes's efforts to make the story contemporary you'd expect him to do more to make it relevant. His own performance is part of the problem. The Shakespeare scholar Stephen Goldblatt saw in Fiennes little more than a constant expression of nausea, and while that sort of sullen disgust may suit the character there's something fussy about Fiennes and his voice that makes him unconvincing as a man of war. His voice lacks the power this character should have. Fiennes might have been better off casting Butler in the lead, had he more confidence in the great brute's ability with iambic pentameter. But that something soft in Fiennes's performance probably has something to do with Coriolanus being, albeit sullenly, a mama's boy, the son of Vanessa Redgrave. Here the actress is a kind of militant stage mother, down to sporting her own uniform and beret, and one who won't let the hero's wife (Jessica Chastain) supplant her as primary caregiver and counselor. There's something here that explains Caius Marciu's discomfort with fame but Fiennes the director doesn't manage to draw it out. The fact is, he's not very good at directing and can't get the best from his players, himself included. It's too bad, because Coriolanus seems a very relevant play today, The least Fiennes has done is convince me that the play is worth another try on film -- with no great wait necessary.
Posted by Samuel Wilson at 11:23 PM

"His voice lacks the power this character should have."

Gen. George S. Patton's had a high, weak voice with an occasional lisp, nothing like the powerful growl of George C. Scott's on-screen portrayal.

One's physical characteristics need not parallel their abilities and achievements. Just look at Napoleon or even Hitler.

Point taken, Peter, but as an actor Fiennes is only pretending to the qualities possessed by a real-life Patton or Napoloeon, so the quality of his voice arguably counts for more than it would in reality. That's probably why Scott didn't attempt an accurate impersonation of Patton's speaking voice, too.

Thank you for reviewing Coriolanus, Samuel. Yesterday, before leaving my office at DISH, I saw online that Coriolanus was available to download to my Hopper DVR. I rented it and it was ready to play when I got home. Modernizing Shakespeare can be a tricky task, but I think they did a pretty good job with Coriolanus; I found the movie to be an interesting mix of shoot em up action and Shakespearian dialogue. I hadn’t really given any thought to Fiennes voice until you mentioned it; I agree that he lacks a certain degree of authority, but when I think about his other films I can remember a whinny tone always present in his voice.