Tuscumbia AL is a southern town and in 1962 Jim Crow is embattled but still enthroned in much of the American South. Here, from a nearby Florence newspaper, is an ad for a special double-feature for the town's black movie fans. You can see the effort that went into it. 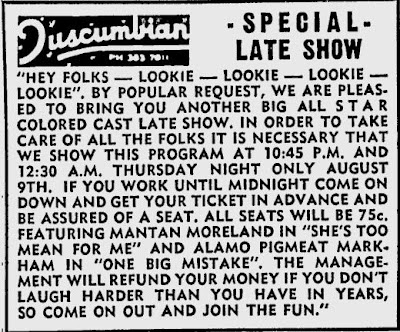 What a treat: two late-night showings on a work night. And what are these "Big All Star Colored Cast" films? She's Too Mean For Me, director unknown, dates back to 1949 (TCM) or 1948 (IMDB). Moreland plays a henpecked husband embroiled in a mistaken-identity plot and ultimately accused of bigamy. The punch line is that he'd rather stay in jail at the end rather than return to his monster wife. Of 1940's One Big Mistake even less is known. All we know, it seems, is that "Pigmeat" Markham starred, though we can infer his co-stars from the cast list for what IMDB describes as an edited-down version from 1947 called Pigmeat's Laugh Hepcats. Neither IMDB nor TCM can name a director or even summarize a synopsis. The Tuscumbian presumably had the original film, but it may be lost now, in either version. They didn't seem to be making them like that anymore by 1962. I imagine some audiences missed the likes of Mantan and Pigmeat, but it seems sad that this is the stuff offered as a special attraction for "colored" audiences. Of course, nothing in the ad says that the show's for "coloreds" only, but given the time and place you can draw your own conclusions.
Posted by Samuel Wilson at 5:01 PM

Email ThisBlogThis!Share to TwitterShare to FacebookShare to Pinterest
Labels: 1962, racism