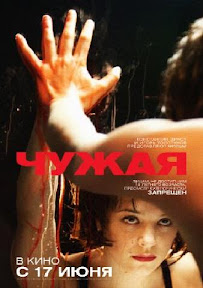 Anton Bormatov's movie was panned upon its limited theatrical release in the U.S. Most reviewers saw little beyond perceived cliches and brutality, and Chuzhaya is pretty much an archetypal crime story. It's an uncomfortable mating of noir tropes and the modern gang picture as a femme fatale comes between a young thug and his Ukrainian homies. Visually, it's a jarring mix of artistic compositions and the aforementioned unglamorized brutality. I'm not sure what the reviewers wanted, since I was impressed by a picture that admittedly wasn't innovative but did strive to breathe life into crime-film archetypes in a relatively novel setting.

Crackhead Kiev crime boss Rasp -- short for Rasputin? -- sends four stooges to Prague to bring home Angela, "the alien" (Natalia Romanycheva) so she can be used as a hostage to keep her freshly-imprisoned brother from ratting on Rasp. Angela was exiled to a gypsy whorehouse, we learn later, to keep her away from investigators after her role, on Rasp's orders, in the poisoning of a group of drug-dealing Kazakh cops. If her brother doesn't talk he'll get the death penalty, and once he's dead Rasp'll probably kill Angela just to be safe. None of that matters to the four stooges -- "Kid," the leader; "Beef," the fat one; "Booger," who gets shot in a gunfight with the gypsies; and "Whiz" (Evgenii Tkachuk), the youngest and maybe the brightest of the group. The gypsies want them to pay for Angela, but Kid pays them in lead. Angela's future doesn't matter -- until she starts to work on them. Once they're down to three after leaving a bleeding Booger outside a clinic, Angela looks for someone to save her from Rasp. Whiz wins the sweepstakes; enticed by sex and a sob-story, he takes down Kid and Beef but is traumatized by doing so. Angela has to take matters into her own hands to finish them off. 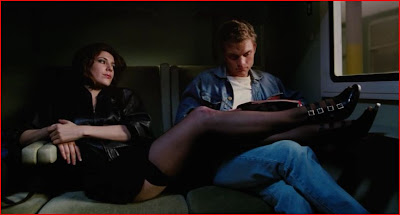 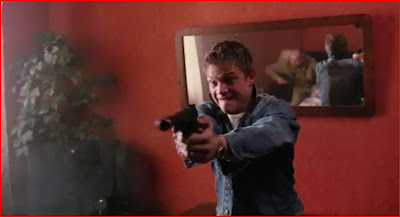 Whiz is haunted by his homies, guilt-stricken by having violated the one code he knows: loyalty to his gang. He takes no comfort in his quasi-erotic idyll with Angela in an abandoned excursion boat and her talk of fleeing west to live like normal people. Finally, however, she convinces herself and Whiz that they won't be safe until they take the fight to Rasp on his own turf. The setup is almost too good to be true -- so what if it involves betraying a bodyguard already persuaded to betray his boss -- except for Whiz taking a bullet. He'll live, but he can't run, and Angela leaves him to the cops. He loses and she wins, but don't forget those loose ends.... 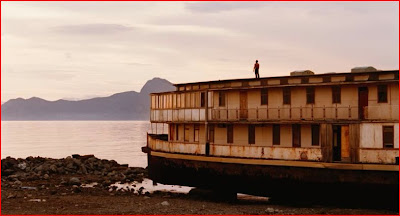 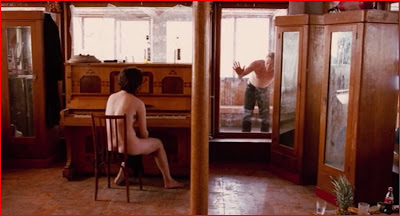 Toward the end, the imprisoned Whiz meets Angela's brother, who explains where she got her "Alien" nickname. Turns out that she's named after the Ridley Scott movie (which Whiz, as of this 1990s-set story, has never seen), and there's a reason she's named "Alien" and not "Ripley." I can see people dismissing this picture as deeply misogynist, since it portrays Angela as a manipulative monster who destroys male camaraderie from within, but my own rule is that no one woman is all women. "Alien" is not Bormatov or his writers' portrait of an entire gender but Romanycheva does give a harrowing portrayal of survivalism taken to a sociopathic extreme that doesn't stop with Rasp's demise. Opposite her, Tkachuk is convincing as an ironically guileless (though not guiltless) thug torn between male bonds and sex drive. His best scene comes when Angela tries to explain why her brother won't rat Rasp out if Rasp has her in his power. Her explanation, of course, is that Rasp will kill her if her brother squeals, but before she can say this Whiz, still haunted and grieving over the friends he's killed or left for dead, bursts out with, "It's wrong to rat on people!" The tragedy of crime cinema, noir or not, is the struggle of lawless people to live by some code when any code is impractical, to say the least. Chuzhaya catches that ironic outrage among criminals that makes their betrayals often seem more poignant or tragic than the everyday betrayals of law-aiding life. A simplistic reading would conclude that the film blames everything on Angela, who planted the seed of betrayal in Whiz. But we ought to remember that no one is innocent in Whiz's world, and we can also question whether his thug cronies, brutes and boors all, were really more worthy of his loyalty than the alien girl. 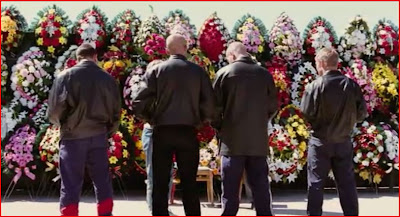 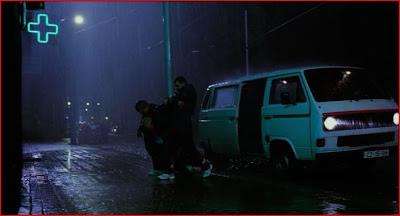 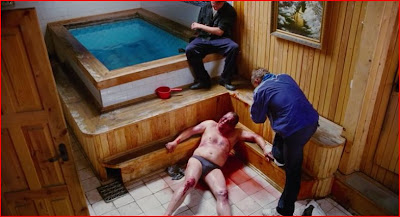 Bormatov aspires to some pictorial grandeur in the scenes in and on the beached boat and the cinematography overall by Anastasi Mikhalov achieves effective contrasts between dark, drab and damp cityscapes and the more open emptiness of outdoor exile. But let's not overrate Chuzhaya into a neglected neo-noir classic. It's a predictable enough story of the sort we've all seen often, if not in this particular setting. The violence may grow monotonous and the tone may seem oppressively dark -- this is the sort of film in which most of the cast comes back for an encore on morgue slabs. But for fans of crime cinema interested in broadening their geographic scope I think there's something to see here. 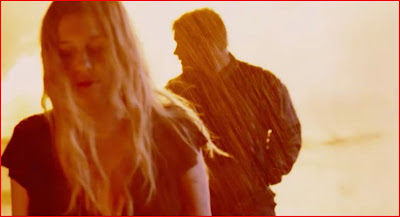 Posted by Samuel Wilson at 4:42 PM

This sounds intriguing and if your choice of screengrabs is anything to go by, it seems to boast some hella good imagery.