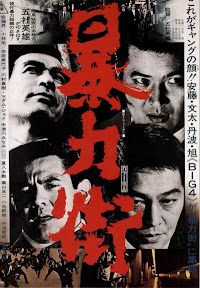 The Toei studio promoted Hideo Gosha's picture as an all-star "new style" yakuza picture, which makes you wonder whether Japanese audiences were getting tired of Kenji Fukasaku's style of yakuza picture while his classic "Battles Without Honor or Humanity" series was still in progress. Gosha's movie definitely is different. While Fukasaku aims at chaotic immediacy by filming violence with a handheld camera, Gosha takes a more carefully pictorial approach. His stages many of his violent set pieces in bizarre settings, most notably a junkyard amid a pile of mannequins and twice over in a chicken coop. In contrast with many of Fukasaku's films, Gosha's makes no pretense, as far as I could tell, of recounting actual events. Gone is the narration that opens and closes many Fukasaku flicks, as well as the captions identifying characters and their places in the yakuza hierarchy. In that respect, Gosha achieves a different kind of immediacy, but his real goal seems to be a greater intimacy, albeit in the more salacious sense of the word.

I don't know if poultry's a big part of the menu at Noboru Ando's place, but I wouldn't recommend the special he serves up to the unhappy patron below.

The star is Noboru Ando, who as a former yakuza presumably had the same sort of credibility that gangsta rappers often claim for themselves. Authenticity gave Ando an advantage as an actor; he rarely had to prove he was tough with the sort of bluster other actors employed. With his almost sleepy eyes and laid-back demeanor -- he reminds me just a little of Jet Li -- he's often the calm center of a storm. That's especially true here, where the storm breaks around him without his character knowing it. He plays Egawa, once boss of his own family who's been eased into retirement with the usual consolation prize of a niteclub. His is the Madrid, and the Spanish gimmick, including flamenco music in the floorshow, is another way for Gosha to individualize his film. The Madrid is a hangout for his former gang, many of whom feel like they were kicked to the curb by the reigning yakuza group, which has its tentacles in many areas of business, including the entertainment industry. Without consulting their own boss, despite their constant protestations of loyalty, these guys try to muscle in on the entertainment side, kidnapping a popular young TV singer and demanding 100,000,000 yen ransom. They get the money but leave a corpse behind; one of the gang accidentally strangled the girl while trying to rape her.

This goes down just as the local yakuza, who control Tokyo's Ginza district, face a growing challenge from the Western Japan Association, which dominates most of the rest of the country. The locals initially assume that the outside interlopers are behind the kidnapping and the escalating gang war brings in some exotic players, including a cross-dressing hit-person with a razor fetish who performs in live sex shows on the side. As the major parties jostle for position, the Madrid club looks more and more like a useful pawn. The people who gave it to Egawa want it back, claiming that they retain the original lease. With his position under siege and his old cronies getting slaughtered, Egawa finally has to take the fight to the enemy.

Violent Streets' cross-dressing killer is a kind of mannequin him/herself.
Is Gosha making a point about disposable humanity?

Toei also promoted Violent Streets as a "Big 4" film featuring many of the studio's top yakuza stars. Along with Ando, the film features Akira Kobayashi as a friend of Egawa's who grows steadily disillusioned with the business, Tetsuro Tanba as the boss of the Western Alliance, and Fukasaku's main star Bunta Sugawara in a cameo role. Sugawara is hilarious as a gun smuggler who supplies Egawa with ordinance and insists on accompanying him on a raid on a rival niteclub. I've never seen Bunta as mellow, or practically stoned, as he is in his brief turn here. He has headphones on throughout and spends most of the attack lounging in the back seat of Egawa's car drinking, chewing on a sandwich and listening to whatever, stirring occasionally to shoot someone. In mid-getaway he asks to be let out on some nondescript street and makes his exit with boombox in tow, living in his own world. It's a wonderful comedy-relief bit that doesn't compromise the grim edge of the main story.

Ando goes on the attack while Bunta looks on.

Gosha's Ginza is full of eccentrics and dysfunctional people. Egawa has to deal with an alcoholic hostess and sometime lover while pining for another woman, which only provokes the hostess's jealousy. Our hero seems like the nearest thing to a well-adjusted person in his semi-retirement, but any vision of stability he has is certainly doomed. He remains a man of violence, as Gosha establishes in the very first scene when he roughs up some rowdy customers. Had he been different, he might have sold out early and escaped the fate he ends up choosing for himself. Yakuza films are often bleak affairs, especially after Fukasaku replaced a myth of underworld chivalry with a more cynical vision. Violent Streets isn't very different in that respect. In the long run, what distinguishes it isn't Gosha's grotesque set pieces as much as the convincing performances from Ando and the rest of the cast. They're not necessarily better for Gosha than they were for Fukasaku -- Sugawara in particular is definitely at his best with the latter director -- but they're somehow liberated here by not having to pretend that they're re-enacting history. Fukasaku's yakuza films are great movies, but Violent Streets arguably comes closer to pure cinema and is definitely a more self-conscious work of violent art.
Posted by Samuel Wilson at 7:18 PM

Wonderful write up, Sam. I've had this movie for several years and still not watched it. Ditto for a fair number of Fukasaku's gangster pictures.