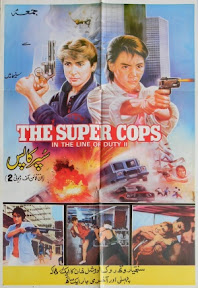 As far as most Americans are concerned, the history of martial arts cinema consists of whatever happened before Bruce Lee, then Bruce Lee and endless badly dubbed imitators fighting each other over their masters' deaths, followed by Jackie Chan's more comical, stunt-oriented movies, and finally today's CGI-enhanced fantasies. Chan didn't break into the U.S. mainstream until the mid-1990s, but a decade earlier Hong Kong action films reflected his influence. What we were taught to admire about Jackie Chan was that he did his own stunts, but on the evidence of Corey Yuen's film the stunts themselves mattered more to some directors, if not to audiences, than who actually did them. I hadn't watched a film like Yes Madam in a while; most of my recent martial-arts viewing had been more oldschool. I had been used to an evolution over the 1970s toward a virtuoso standard of martial-arts skills reflected in the movies' increasing emphasis on training sequences, however fantastic those may have been. Watching Yuen's movie after watching a lot of Seventies kung fu is like watching a modern musical after a diet of Fred Astaire. Astaire wanted to show off his skills by having directors showcase his full body in long takes, while in later musicals directors often assert themselves by conspicuously editing dance numbers. The fight scenes in Yes, Madam are all about stunts and editing, but there's more point to the practice than there is in many modern musicals. The individual shots could be compared to the panels of a comic book. Every set-up is framed for the maximum impact from a short burst of action. Individual blows are more devastating than in oldschool fight scenes, as wirework often sends a stuntman flying after a powerful kick from one of the heroines. Slow-motion is employed liberally to emphasize the reality of certain stunts. As a whole the fight scenes are more dynamic and more cartoonish than what you might have seen a decade earlier, and that seems to fit the cartoonishness of the picture as a whole. 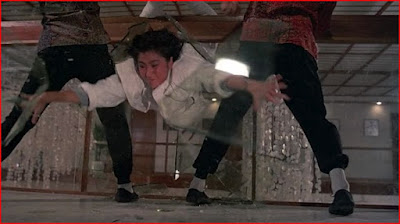 Michelle Yeoh is armed and dangerous 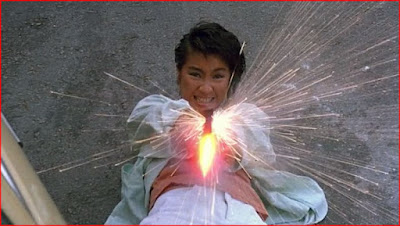 Yes, Madam is a cop movie of confusing lineage -- billed on screen as a sequel to a picture that, according to IMDB, actually came out a year later, the two having in common Michelle Yeoh, then still using her original nom d'ecran of Michelle Khan, in early starring roles. What struck me about this particular cop movie is how like a Lethal Weapon picture it was in its overblown goofiness and rambling narrative. It's more like a later Lethal Weapon to the extent that comedy relief characters are allowed to try to steal the movie. A viewer expecting an action-chick apotheosis, since the film teams Yeoh with American karate champion and future B-movie star Cynthia Rothrock, will be surprised and probably appalled to learn that they have no more, really, than an equal share of screen time with three male criminal buffoons, each named after some popular pain reliever: Strepsil, Aspirin and Panadol. They're thieves and counterfeiters, constantly whining at and bickering with each other while earning money to subsidize the retirement of their old master (powder-haired co-producer Sammo Hung). They accidentally acquire frames of microfilm that could expose a vast criminal network after an old Scotland Yard mentor of Inspector Ng (Yeoh/Khan) is killed by gangsters in a hotel they intend to rob. In the confusion the comedy crooks make off with the film inside the victim's passport book -- the real prize as far as they're concerned. 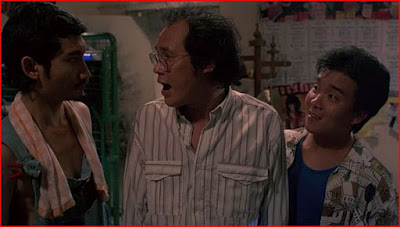 Ng wants to track down her mentor's killers, with the aggressive assistance of British detective Morris (Rothrock), while the killers are trying to find the microfilm that the crooks don't realize they even have until relatively late in the proceedings. Add an angry fugitive who buys the doctored passport from the crooks only to have a shitstorm of hard-kicking justice descend upon him, a pool hustler and his personal band of enforcers, etc. etc. and you have a nice recipe for an hour and a half of energetically stupid mayhem. 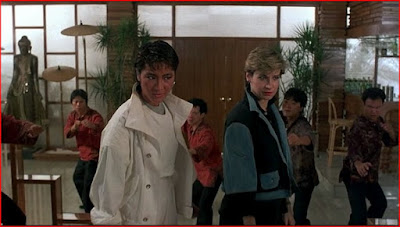 This is one of those 1980s movies that may leave viewers of a certain age struggling to remind themselves that they actually lived through that decade. Did people thirty years or so ago really dress like that? I suppose it's progressive that Yeoh and Rothrock are hardly glamorized here, but it's one thing not to be treated as sex objects, another to be subjected to the garish baggy costumes they wear in Yes, Madam. Sometimes they look like children on a playdate, or at least like their mommies had dressed them, but there's a point to it. For one thing, those outfits probably provide the ladies some much needed padding for the falls they'll have to take. And while there are plenty of shots that demonstrate that Yeoh, with her dance training, and Rothrock, with her non-combat karate training, are convincing cinematic fighters, Yuen's characters need to make some amazing acrobatic leaps and when they do, the shots are from far enough away for us to assume that these are men, not women, doing the stunts in those conveniently loose, mannish garments. Needless to say, this is where rapid-fire editing comes in very handy. 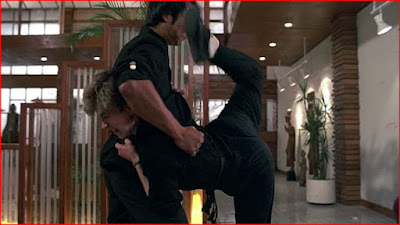 Some women's skills probably can't be duplicated by stuntmen

Like many a Hollywood cop film of the era, Yes, Madam features mismatched partners. While the thrill of the picture is the idea of two women beating up all the men, the women themselves never really become buddies. Whether a political comment is being made in then British-ruled Hong Kong, or a cultural comment is made on western cop movies, Yuen's movie makes a pointed distinction between Ng's subtler methods with prisoners and Morris's hard-charging brutality. The Brit is more inclined to beat information out of a suspect, but the Chinese does not act differently out of squeamishness. "If that worked, we'd do it," Ng tells Morris after pulling her off a hapless prisoner. Ng is more likely to let a perp escape custody in the expectation that he'll lead her to the next level of the criminal food chain. She's usually right, of course, though the chaotic scheming of the three comics complicates things. It ultimately compromises the picture until Yes Madam is more about the crooks than the cops, closing not with the superwomen sharing a triumph, but with one of the crooks going vigilante on a cackling master criminal. It's an abrupt wrap-up very unlike an American cop movie, and why Yuen and his writers should want to wrap it that way is probably what makes the picture most foreign. The Chinese may not have the same idea of "comedy relief" as Anglophones do, so it may not have jolted them so much to see a film close with a buffoon turned bloody avenger. On the other hand, since this film's master criminal is shielded by the legal system from the fate he presumably deserves yet can't receive at the hands of the policewomen. Even Morris won't shoot a man in cold blood, but a pathetic petty criminal, a man who was a punching bag for most of the picture, pretty well can. It's still an odd way to end the movie, but it may seem less odd to its original audience for reasons I don't fully get yet. But as long as you feel that Yes, Madam has given you the quota of kinetic cinema you were looking for -- and you probably will -- you can let the ending go.
Posted by Samuel Wilson at 10:18 PM