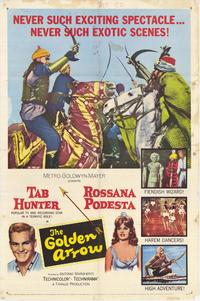 It took five credited writers to give Antonio Margheriti something to film while he had the services of fast-declining star Tab Hunter -- who as it happened, had already filmed an episode of his short-lived TV series with the "Golden Arrow" title -- but more than five writers deserve credit for what we see on screen. Add to the official list of five Italian scribes the names of Lotta Woods, Achmed Abdullah and Douglas Fairbanks Sr., since La freccia d'oro is for the most part a remake of Fairbanks's epic fantasy, Raoul Walsh's The Thief of Bagdad. In short, a rogue with a noble heart competes with three princes, one an unscrupulous conqueror, for the hand of a princess. While the rogue embarks on a quest, the princess tasks the princes with finding the rarest of treasures. They find what their counterparts found in 1924: a crystal ball, a flying carpet and a magic cure-all. The most militant of the princes conspires to take Damascus and the princess, but our hero saves the day with his own hard-won magic. Instead of a winged horse, the Thief of Damascus, clean-shaven Hassan (Hunter) has the title weapon, briefly at first and more decisively later. He wins it initially as the one contestant who can pull a heavy bow -- it's apparently a birthright -- but loses it because he meant to use it for selfish purposes. His quest to retrieve it is his atonement for various deadly sins of attitude. He has help, in this film's major deviation from the Fairbanks story, in the form of three comedy-relief genii, one old and bossy, one rather stupid and clumsy, the third rotund but otherwise nondescript.  They ground the Italian fantasy (which wasn't released in the U.S. until 1964, by which time Hunter's stardom had dimmed still further) as a kiddie picture and finally subvert whatever chance Margheriti and an ambitious art-direction and effects team to make a fantasy film worthy of its American model. 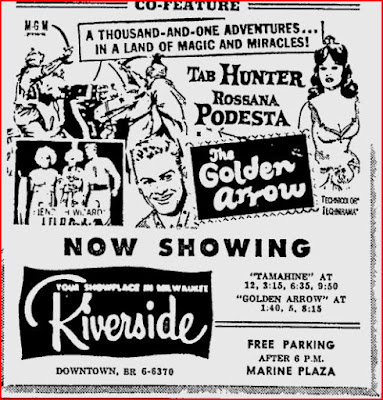 Margheriti took a long time shooting La freccia -- a contemporary news report marked six months that Hunter had spent on the production -- and the locations were worth the time spent locating them. A lot of the film was shot in Egypt at authentic ruins that give the picture just the sense of epic grandeur it needs without spending too much money on sets. When sets and effects are needed Margheriti's team goes to town. The highlight of their work is a hair-raising scene when Hassan visits an underground kingdom, is condemned by its queen for trespassing, and is chased by men on fire. Throughout, art director Flavio Mogherini and set designer Massimo Tavazzi keep things vivid and lavish. They still try hard when they fall short; their flying-carpet effects aren't much of an advance over Walsh's work and they end up skipping what seemed to be set up as the film's big finish: a fight between carpet-borne enemies. They're at their worst when the film becomes most childish. In the Fairbanks Thief of Baghdad, the hero summons an armed multitude to fend off the villains' attack. In Golden Arrow Hassan can use his weapon to dismantle the enemy's weapons, from bows to catapaults, and to tear a flying carpet apart in strips, but most of the damage is done by the three comedy genii, who rout the invaders by gathering up a lot of ash-filled urns and dropping them on soldiers' heads. While we see impressive airborne shots of two armies clashing, the hero and his buddies turn the tide without killing anyone. Even the evil prince and his traitorous ally are dispatched by dumping them into a pool of oil once their flying carpet goes to pieces. We leave them trashing about in frustration; whether anyone bothers to capture them remains a mystery.

Add Gabor Pogany and Giovanni Raffaldi's cinematography to the mix and Golden Arrow is nearly always ravishing to look at in a proper widescreen presentation. Listening to it is another story. Hunter didn't stick around to dub in his own dialogue, and the usual flat dub work by voice actors overfamiliar from countless peplum movies deprives the film of much of the verve and flamboyance it needs. The same goes for Mario Nascimbene's score, likewise overfamiliar in its repetition of too-familiar peplum motifs.  A lot of trouble was taken to finally make this picture sound like just another imported B movie. Margheriti might have been better off had he, like Douglas Fairbanks, made a silent film. Instead, Golden Arrow is an often attractive spectacle that ends up being less than meets the eye.

TCM showed it last week, and TCM has the trailer -- now so do you.
Posted by Samuel Wilson at 9:13 PM