Depression Fighters: THE PRIZEFIGHTER AND THE LADY (1933) and CARNERA THE WALKING MOUNTAIN (2008) 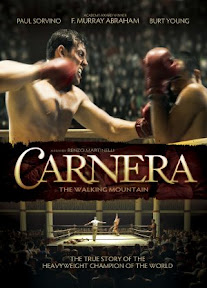 When I first saw Wilson Yip's martial arts biopic Ip Man (2008), the film's backdrop of economic deprivation during the 1930s immediately reminded me of Cinderella Man (2005), Ron Howard's Depression-set biopic of boxer James J. Braddock. If three films make a genre, then Renzo Martinelli's 2008 biopic consolidates a global "Depression fighter" genre and simultaneously achieves the genre's reductio ad absurdam. If, after watching Ip Man, I had concluded, "Any country can do this!" I would have balked at Italy's turn. That country's combat-sport hero of the era was Primo Carnera, a figure for whom the "print the legend" approach probably isn't an option. The legend of Primo Carnera, after all, is that he was a fake, a bum, a talentless lummox whose path to the heavyweight championship was paved with fixed fights and whose reign ended the moment he met a real fighter in a real fight. The legend was locked in place by the 1956 movie The Harder They Fall, which didn't fool Carnera by making its dumb-ox patsy a South American, yet casting Carnera's real-life nemesis Max Baer as the fighter who destroys Humphrey Bogart's hapless protege. Carnera reportedly sued the producers for defamation, but another half-century would pass before anyone attempted a cinematic rehabilitation of the fighter's reputation. In Martinelli's account, Carnera (Andrea Iaia)is a guileless giant who can and would fight for real and takes offense when his initial manager (F. Murray Abraham) pays his first foes to take dives in order to protect his novice prospect. That Carnera could do real damage is indisputable; at least one opponent died after fighting him. While some historians suspect that the fix was in when Carnera beat Jack Sharkey for the crown in 1933, The Walking Mountain (a mundane rendering of his more alliteratively lively nickname, "the Ambling Alp") portrays the fight as an honest triumph for its hero.

Walking Mountain stresses how Carnera inspired pride in Italians and Italian-Americans (and spared his children the poverty he suffered in childhood; an epilogue notes that two junior Carneras grew up to be doctors) but avoids engagement with the political implications of that fame. Martinelli doctors newsreel footage to show his Carnera alongside Mussolini and has the actor give the Fascist salute in the ring, but these are just matters of period detail for the director -- one wonders how the dreaded Uwe Boll handled the political angle in his 2010 Max Schmeling biopic, for comparison's sake. Carnera suffers, I think, from ignoring politics simply because there has to be a political context in the global boxing ring when Carnera, representing Fascist Italy, Schmeling, representing first Weimar and then Nazi Germany, and Max Baer, a Jewish-American who wore the Star of David on his trunks, all wore the championship belt. I'm not saying poor naive Primo has to answer for Mussolini's crimes, but I do feel that the political drama of the period would add to the drama of the fights, as it does when filmmakers contemplate the rivalry of Schmeling and Joe Louis. And Walking Mountain can use all the dramatic help it can get. Martinelli doesn't do a very good job with the fight scenes. His staging of the Carnera-Sharkey fight is less dramatic than the actual newsreel footage. In filming the climactic Carnera-Baer bout he falls between two stools, unable to decide, it seems, whether Rocky or Raging Bull should be his model. The beating Carnera takes at Baer's hands ought to be a moment of supreme comeuppance, like Jake LaMotta's last fight with Sugar Ray Robinson in the Scorsese film, but Martinelli is incapable of investing the action with anything like Raging Bull's thematic force, much less Scorsese's expressionistic exaggerations. In part that's because Martinelli wants to emphasize Carnera's courage and perseverance under extreme adversity as the champ struggles to fight with an injured ankle while Baer gets away with all manner of dirty tactics. Nor, despite some scenes when Carnera is mean to his wife, do we get the feeling that Primo has this beating coming, especially since we understand him to be innocent of all the chicanery that advanced him early. Overall, Martinelli seems more interested in making a period piece by artificially aging or decolorizing his footage than in making his story more than a collection of fight-film cliches. But he doesn't even get the period right all the time. One anachronistic scene shows the filming of a TV preview of the Carnera-Sharkey fight of 1933 -- a year when TV was still almost purely experimental.

One angle Martinelli might have worked was whether fame went to Carnera's head. It would have been interesting, given the importance of Carnera's rivalry with Baer, had Martinelli done something with the two fighters filming W. S. Van Dyke's The Prizefighter and the Lady in Hollywood before their title fight. In the M-G-M production, Carnera plays himself as the heavyweight champion, while Baer plays a toned-down (and anglicized?) version of himself as "Steve Morgan." Reportedly, Baer was so impressed with himself as an actor that he wore Steve Morgan's robe to the ring for his real fight with Carnera, months after they filmed a kind of pre-enactment of the battle for the movie. Baer was already considered the top contender after having KO'd Schmeling, and Prizefighter has to be considered a unique instance of using a fictional film to promote a real-life fight. In fact, the film plays out like a Bizarro-world version of the historic bout, with Baer's Morgan taking a massive beating at Carnera's hands as a kind of Scorsesean comeuppance for the fictional character's arrogance and his betrayals of a long-suffering wife played by Myrna Loy. But before it ends the fight becomes more Rocky than Raging Bull -- as is usual with fight films -- as Steve Morgan mounts a major comeback once his spurned, sometimes-sozzled manager (Walter Huston, here billed below Carnera and ex-champ Jack Dempsey) and his still-faithful wife give him their tactical and moral support. It's an original-style Rocky finish -- the fight is a draw and Carnera retains the title, but is treated as a victory for Morgan. It was really the only finish the film could have. I can't see either fighter agreeing to appear if the script had one of them losing.

The Max Baer biopic is an event waiting to happen. His reign as champion has been bracketed by two other pictures, Walking Mountain and Cinderella Man, both of which portray Baer as a boorish, brutish villain -- though the Carnera picture has the bad guy gain respect its hero in the approved Apollo Creed manner. You'd think someone would want to make a picture about a proud Jew who beat the crap out of a "Nazi" and a "Fascist," yet the consensus of filmmakers who've actually used Baer as a character is that he was a creep, a jerk, an asshole who could kill people with his gloved hands. For all I know, the Carnera-Baer fight was the only heavyweight title match pitting two fighters credited -- if that's the right word -- with killing opponents against each other. The filmed record shows that Baer was a dirty fighter and a supreme trash-talker and taunter. He does not seem to have been a nice man. Yet he was considered handsome for a fighter, especially by contrast with Carnera, and M-G-M thought they could make him a sex symbol. According to one contemporary report, Clark Gable was originally slated to star in Prizefighter until someone from the studio saw the Baer-Schmeling fight. The promotion for the picture heavily emphasized Baer's sex appeal, as did the fighter himself. He pitied the German women who were unable to see him on film after the Nazis banned the picture. 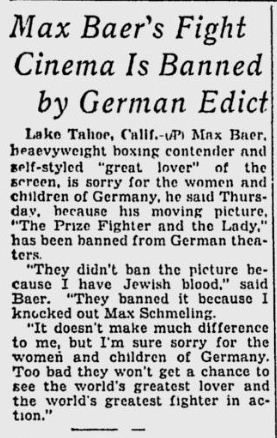 As an actor, Baer makes an honest try and isn't awful, but he lacks essential movie-star charisma. His face and voice simply aren't expressive enough, though his arrogant personality sometimes shines through. He isn't helped by a corny rise-fall-and-rise story and the hackneyed heart-interest elements. There's a weak subplot featuring Otto Kruger as history's least assertive gangster, the Loy character's erstwhile boyfriend and employer who supposedly has a hate on for Steve Morgan yet can't motivate himself to do anything about it. His idea of ultimate vengeance is to invest in the promotion of the Carnera-Morgan fight so that Loy will see her hubby humiliated and abandon him. But he's still an old softy, unwilling to take what he thinks is his, and where's the fun in that? Fortunately, Van Dyke milks the climactic fight for maximum drama, starting with a slow build-up, Madison Square Garden style, to establish authenticity. He films the entire ritual of the ring announcer introducing the judges, the timekeeper and the old-time fighters (including a professional wrestler, Strangler Lewis, clearly regarded as the boxers' peer) before the fighters arrive. The director makes Carnera look as powerful as the fighter probably ever did; taking deep breaths with a massive chest and with his arms stretched over the ropes between rounds, he looks like he should have broken Baer in half in real life. It goes to show that looks aren't everything. 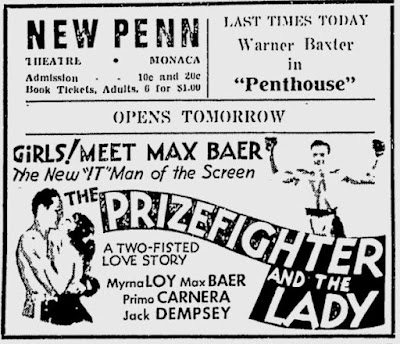 Apart from the fight, the highlight of the picture is Max Baer's big musical number. Prizefighter is a semi-musical -- Loy gets to sing (or lip-synch?) two songs -- and part of Steve Morgan's decadence is his decision to go on a vaudeville tour. There's something surreal about the concept; this is supposed to be a cautionary tale about what a fighter shouldn't do, but by filming it over a period of weeks in Hollywood, Baer is doing in real life what the film says his fictional self shouldn't do. As for his big number, "Lucky Fella" isn't as blatantly lewd or as relentless a parade of flesh as many Pre-Code spectaculars, but it's rather suggestive in its energetic way. The star is supported by perhaps the most athletic cohort of chorines assembled in the era for a satire on the rigors of a training camp. Van Dyke takes an anti-Berkeley approach to the scene, emphasizing the stagy artifice for added amusement as Baer and his harem run frantically in place, the girls collapsing one by one as the landscape rotates past them, symbolizing the hero's sexual prowess until a final girl defies the odds -- but look at the damn thing yourselves. MaxiesGal uploaded this priceless clip to YouTube.

A Baer biopic would almost be worth it just to have someone recreate this scene. But we're more likely to see Spike Lee finally film his and Budd Schulberg's Joe Louis screenplay -- Schulberg wrote the story for The Harder They Fall, by the way -- before anyone tells Baer's side of the story. Maybe Max Jr., the erstwhile Jethro Bodine, has the rights tied up. But if there's an interest in the ways mighty men survived hard times by fighting, there should be a market for Max Baer, warts and all. I suppose we like these boxing (or martial arts) stories because, unlike the stories of stars of team sports, they're all about individual accomplishment. In a way, a fighter is the ultimate self-made man, even when surrounded by managers, trainers, family etc. As such, he may be a special symbol of hope in tough times. He inspires even as he loses, even when he loses badly, as long as he doesn't stop trying -- or so filmmakers always hope.
Posted by Samuel Wilson at 11:50 PM