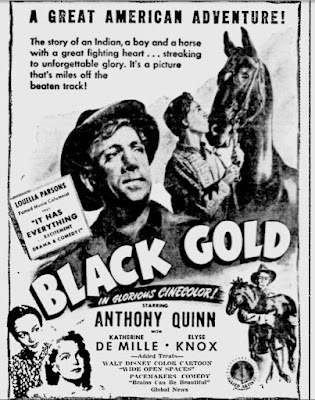 Phil Karlson's sentimental Cinecolor spectacle marks a multiple milestone. One of the first releases by Monogram Pictures under its new upmarket Allied Artists label, it's also, to the best of my knowledge, the first starring role for future Oscar winner and Hollywood legend Anthony Quinn, who had been toiling as heavies and in supporting roles for a decade prior. As such, if I'm right, it sets a tone for Quinn's subsequent star career, for right off the bat we have him as an earthy ethnic type, more wise than intelligent, whose vitality is his greatest virtue. The film itself, based partly on fact and written by Agnes Christine Johnson, is a curious document of its time, progressive and patronizing at the same time, an avowedly anti-racist film bordering on stereotype whenever its star is on screen.

It opens with a strong hint of the tougher tales Karlson would tell later, with a couple of cowboy types bringing an old Chinese man and his Americanized son across the border from Mexico. The boy, Danny (Ducky Louie, probably best remembered as a young Filipino martyr in Back to Bataan, also with Quinn) was born here, but the old man's just come across the ocean. His journey ends in the desert as the cowboys shoot him in the back after taking his money. Danny's horse throws him and drags him, but the cowboys skedaddle at the sight of what they think is a Border Patrol man before they can finish the kid off. The lone rider is no lawman, but Charlie's Eagle (Quinn), a reservation rancher and horse breeder who rescues Danny and gently warns him against blaming all whites for the crimes of the cowboys. White men killed Charlie's own father but he got over his hate and has come to know good whites as well as bad. He takes Danny under his wing on a trip to Mexico, where he plans to race his filly Black Hope, but Charlie doesn't understand the racing business. Signing the horse up for a claiming race, he's stunned when a slick breeder puts up the claim money and takes possession of Black Hope after the horse wins. Charlie and Danny promptly steal the horse back and bring him home to the Eagle ranch, where Charlie's wife (played by Quinn's own wife, Katherine De Mille) waits stoically, but with almost instinctual anticipation of his return, every time Charlie goes wandering as is his ancient wont. Charlie doesn't exactly live by the old ways, but he has some of the old instincts, including an aversion to closed spaces. But now that he's settled down for awhile, the Eagles set about adopting Danny and sending him to school. A few chants of "Chin Chin Chinaman" are enough to keep the kid away from class, but a pretty schoolteacher and parental pressure set him straight. All is well for Danny except for that great adolescent rite of passage, the death of a beloved animal. Charlie has cajoled a prestigious breeder into mating Black Hope with Black Tony, a prize thoroughbred, but the mare won't long survive the foaling of Black Gold and Charlie has to put one in her brain while Danny cries inconsolably.

Black Gold was a real Indian-owned steed that won the 1924 Kentucky Derby, and Charlie Eagle is very loosely based on Al Hoots, the man who actually had a misadventure in a Mexican claiming race and whose mare was the mother of the actual horse. The concept of an adopted Chinese son who rides Black Gold to victory is an innovation of the film script. It's an admirable multicultural gesture but the picture hardly seems progressive with Quinn's performance in the foreground. While Charlie's wife is rez-educated and speaks impeccable English, our hero babbles in Hollywood pidgin, speaking of himself consistently in the third person. At least that's better than "me" this and "me" that, I suppose. Charlie's simplicity is hard to swallow sometimes. How plausible is it that a landowner in oil country could be as indifferent to the prospect of striking oil as Charlie is? But Black Gold shows Charlie caring very little whether his well comes in and complaining when the gusher soils his land. So horse-obsessed is he that the only benefit he sees from the well is when someone calls the oil "Black Gold" and gives him a name for his foal. Indeed, the oil proves his undoing when an injury Charlie suffers while wandering too close to the well saps his strength. In the would-be tearjerking highlight of the picture the hero decides to die oldschool, wandering into the desert to meet his maker, only to have his wife, son and horse show up to comfort him. Unfortunately, Charlie's demise take the life out of the picture, so that Danny's ride to victory at Churchill Downs proves anticlimactic. In part that's because Karlson, relying on actuality footage filmed at the track by B. Reeves Eason, doesn't figure out how to make the race dramatic. But the main reason is that Black Gold's race was Charlie Eagle's dream more than anyone else's, and without Charlie seeing it and getting vindicated the film has no real payoff. Understandably, Quinn soon returned to character acting and the film was pretty much forgotten. Still, in light of the career to come, Black Gold is clearly an important part of Quinn's filmography because it definitely gave somebody -- Quinn himself or others who watched the thing -- an enduring idea of what Anthony Quinn was supposed to be on screen.
Posted by Samuel Wilson at 11:07 PM