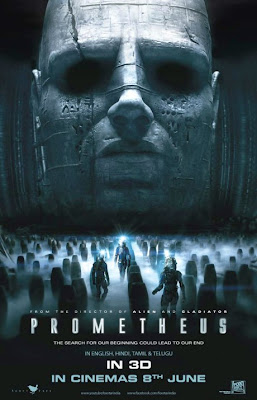 A fellow pedestrian recognized me as a fellow moviegoer by the soda I was slurping on the way back from the theater. "Did you just see Prometheus?" he asked me. When I answered yes, this was his review: "It wasn't scary! I figured, Alien, a horror movie. But I guess not." That's probably why Ridley Scott and his cohorts were coy about their new film's exact relation to his 1979 classic tentpole. They weren't making the same kind of horror film as that. This time Scott aspires to philosophical horror in a way that led Guillermo del Toro to despair of ever actually adapting H. P. Lovecraft's At the Mountains of Madness. He fears that Prometheus will make his project seem repetitive, but if I were him I wouldn't give up. Scott finally pulls back from horror, after all, and in spite of the film's inevitable teaser finish, leaving that field to someone working closer to Lovecraftian mode. Prometheus closes -- or virtually closes -- on a note of defiance rather than despair, affirming the special qualities of humanity rather than its insignificance. But I'm getting ahead of myself.

Prometheus manages to feel like a throwback, as a prequel should, and in spite of special effects that can't help but make this time's technology appear anachronistically superior to Alien's era, thanks to its indulgence of the sort of ancient-astronaut mythology that was trendy back in the 1970s and seems conveniently to be popular again, judging from the success of Ancient Aliens and similar TV atrocities. After a prelude, the story proper opens, and Scott acknowledges the influence of Werner Herzog, with the exploration of caves on Earth. One such cave sports paintings very like those Herzog filmed (in 3-D) in Cave of Forgotten Dreams, with the added element of an apparent star chart matching those found at digs all over the world. Pitching this discovery as proof that human origins can be traced to a world in a cluster matching the one in the cave-painting, Drs. Elizabeth Shaw (Noomi Rapace) and Charlie Holloway (Logan Marshall-Green) manage to get funding for a space expedition from an archetypal supercorporation with shadowy motives, represented on board the Prometheus vessel by Meredith Vickers (Charlize Theron), of whom the captain (Idris Elba) plausibly if teasingly asks, "Are you a robot." Perhaps I shouldn't answer, but it's no secret that David (Michael Fassbender) is. He runs the ship, acting like Hal and Dave Bowman in one person, until it's time to wake everyone up after two years in stasis. Vickers asserts her authority but the crew and the doctors have minds of their own. You know they're going to contact something or else there won't be much of a movie, and you know they're going to contact something dangerous or else it still wouldn't look like much of a movie to most people. So much for the spoilers.

If my fellow viewer felt that Prometheus wasn't a proper horror movie, he shouldn't have been surprised. In our time Scott had to make more of a roller-coaster ride movie than he did 33 years ago, so we get sight-gag set-pieces like heroes racing a dust storm or racing to get out from under a falling spaceship. The most physically horrific scene in the picture, most people seem to have decided, isn't an attack on anyone but one in which Dr. Shaw subjects herself to a robotic Cesarean section; this being a movie, she can run from the operating theater, albeit on massive pain-killers, within about a minute of being sutured. I concede, however, that she had good reason to run as fast as she could. There's actually very little in the way of Alien-style attacks, and in tone the new Scott films sometimes seems more reminiscent of James Cameron's Aliens than Scott's own precursor. But Scott does want to scare us, only with scary thoughts rather than conventional scares.

The main thematic thread of the picture is Dr. Shaw's crisis of faith. It's not a conventional crisis, since her Christian faith isn't very troubled by her hunch that life here began out there. Faith itself is the issue, not the objects of faith. Shaw says she's guided by faith in our alien origins as mapped by the cave painting, while she and her boyfriend Holloway are driven by a desire to meet and talk to the beings they believe responsible for human life. About this Hardwick could not care less, while David the "robot" seems skeptically bemused by the doctors' yearning. David and Shaw represent two extreme points of view in a debate carried to the end of the film, if not beyond. Shaw wants to meet our creators because she has questions to ask. By the end of the movie she has different questions, but she always insists on answers. The most crucial question, which I need not phrase in full, is "Why?" Without a "why," she's no better than the humans presume David to be in his knowledge that humans made his kind "because they can." It's presumed that David would be disappointed is he was capable of disappointment, but he seems to labor under something arguably worse than disappointment. His problem may be that he too readily accepts "because they can" as a satisfactory if unimpressive answer, while the human condition, embodied by Shaw, refuses to be satisfied with that explanation despite this story's damning evidence. For the Holocaust survivor Primo Levi, the defining statement of the concentration camps was a guard's remark that "there is no why" there. But humanity insists on a why, or at least that's what Scott, John Spaihts and Damon Lindelof believe -- and their belief takes them beyond the Lovecraftian presumption that the human spirit would buckle under cosmic knowledge. Faith, it seems, is the belief, if not the demand, for "why." The fact that the human quest for "why" will apparently continue, however hopeless it seems by the end and however motivated now by anger rather than hope, finally establishes Prometheus as science fiction rather than horror.

The script overplays its hand a bit by introducing one too many generational conflicts to illustrate David's assumption that everyone wants to destroy their parents, and the movie suffers from the common blockbuster syndrome of multiple-climax fatigue, also known as not knowing when to end. But Prometheus maintains thematic integrity despite its messy resolution, and it is a pretty picture no matter how you see it. Scott makes some of the best use of 3-D I've seen since Herzog's documentary, though that film still sets the standard for me. Even if you see the film flat, I expect you'll be dazzled by the cinematography Dariusz Wolski, a talent liberated from toiling for the Pirates of the Caribbean for most of the past decade and apparently enjoying his freedom. There was probably no way this film could live up to some people's expectations for it, by it's a pretty good picture on its own terms, at least most of the way -- and that's more than a lot of moviemakers can say these days. Alien may be Prometheus's sequel by default, but the new picture left me wondering what an actual sequel -- a lonely quest for "why" across the cosmos -- would be like. Consider that a thumbs-up in spite of everything.
Posted by Samuel Wilson at 8:22 PM

I enjoyed "Prometheus" for the most part, and though I wish that it were even more distanced from the "Alien" franchise than it already is, I find a lot of what was accomplished at least fairly interesting. It'll hopefully benefit from a director's cut when it comes to DVD, and should there be sequels, perhaps the unfulfilled nature of this one will all work out in the long run. Still, in its current shape, I'd rank it just a hair inside the original three films, and miles above everything from "Resurrection" on.

I see your point in that the final reveal of an Alien really seemed unnecessary to the film's own agenda, and I'd like to think they could have pulled off the idea of Prometheus taking place in the "Alien universe," as it were, without actually tying it to those films. This film did leave me interested in what might happen to Dr.Shaw in her potentially Ahab-like pursuit of the "engineers," but I'm not sure if anyone can envision anything cinematic in it.